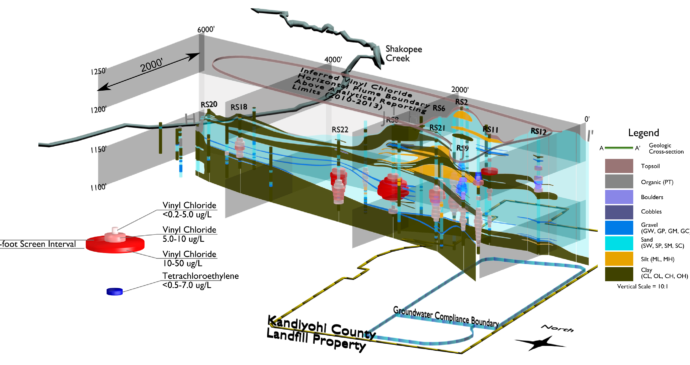 3D Technical Illustrations and Animations in civil and environmental engineering allow engineers and scientists to communicate the conceptual and unseen problems faced by clients, at the intersection of public regulatory affairs, and perception.
Often enough, projects & studies can be derailed, underfunded or ignored by a lack of fundamental understanding for active but invisible processes and poorly illustrated figures that fail to draw significant attention to the issues under discussion.

Above, ECAD Engineering took existing site investigation data for a Tetrachloroethylene and Vinyl Chloride plume extending from the Kandiyohi County Landfill, and rendered an animation that highlights the scope and magnitude of the work performed; engaged the regulatory agency in complementary understanding of the technical details; and afforded the client a means to engage the public in the pursuit of continual financing for corrective action activities.
As part of the creation of the animation, two technical demonstrations of online 3D interactive models were created:

Below, a depiction of a digital diorama created from study sites in the Capitol Region Watershed, prepared as part of a request for qualifications for a 2015 professional services consultant.

As part of the production of the illustration a digital diorama in blender (blender.org) was created and is available here: CRW-DIORAMA.blend
A simple demo of GIS data with the 3D base map is here: QGIS Example 3D Map